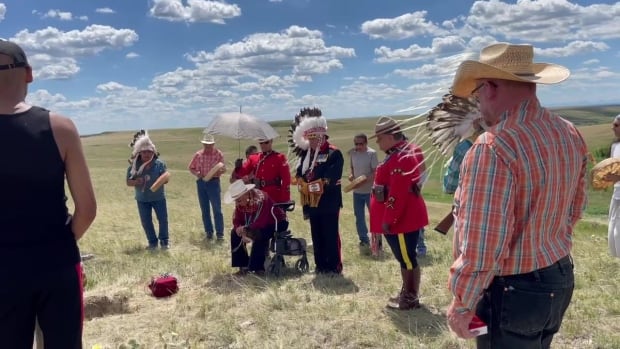 
A human cranium present in southern Alberta in 1979 has been returned to the Kainai Nation and buried as an unknown Blackfoot warrior.

RCMP say the cranium was discovered within the Previous Man River west of Lethbridge and was turned over to police, who handed it on to the College of Alberta for evaluation.

It was decided the cranium belonged to a male, roughly 60 years or older, and was “decided to be prehistoric, subsequently Indigenous in origin,” RCMP mentioned in a information launch on Monday.

Sgt. Bryan Mucha with the Fort Macleod detachment mentioned the cranium was discovered by a service member who was swimming within the river in 1979.

“As soon as the examine was accomplished … the cranium was returned to the finder,” he mentioned.

“Now, I do not know why that occurred, as a result of I do not assume that may occur now. However in 1979, that may have been a traditional course.”

Mucha mentioned that individual held on to it after which determined they didn’t want it and returned it to the detachment.

“In March 2021, Fort Macleod detachment representatives engaged in discussions with members of the Blackfoot Nations to find out the very best course to make sure a respectful and correct reburial of the cranium,” RCMP mentioned within the launch.

“Kainai Religious Elder Joe Eagle Tail Feathers was consulted together with different non secular Elders and Sundancers, and a standard burial ceremony was held on June 26, 2021, on the Blood Nation.”

Mucha mentioned the evaluation performed by the college had decided the cranium had been fractured sooner or later previous to the person dying.

“So the non secular elders felt that it was potential, or possible, that that individual could have been a Blackfoot warrior and had possibly sustained an harm throughout his lifetime, previous to his passing,” he mentioned.

The RCMP launch mentioned the ceremony included wrapping the cranium in a standard blanket, adopted by a smudging ceremony and interment.

“Songs and prayers had been sung for this ancestor of the Blackfoot Folks as he was buried in a small grave close to the place the Previous Man River and Stomach River merge,” reads the discharge.

“The grave is marked with a bleached white stone indicating ‘Unknown Blackfoot Warrior.'”