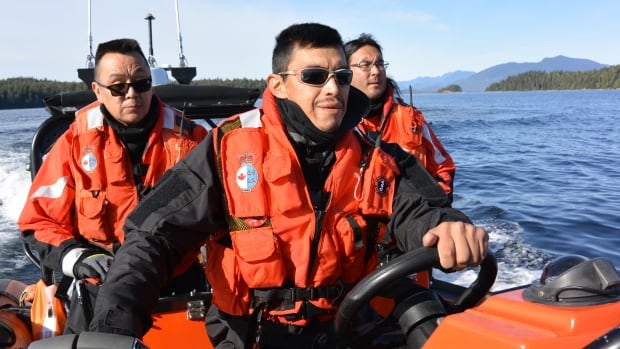 First Nations alongside B.C.’s West Coast have an extended historical past of responding to emergencies within the Pacific.

Now, greater than 4 years since it was introduced, the Indigenous Canadian Coast Guard Auxiliary has absolutely launched in B.C. — already having accomplished quite a lot of missions.

The auxiliary consists of fifty volunteer members from 5 first nations alongside B.C.’s coast — the Ahousat, the Heiltsuk, the Gitxaala, the Nisgaa and the Kitasoo.

Tuesday night, the auxiliary was dispatched to a name in Bella Bella, the place somebody was within the water. The mission was successful.

“Fortunately, the particular person was discovered protected and sound,” stated Conrad Cowan, the manager director of the auxiliary.

Cowan says the auxiliary will now work in tandem with the Canadian Coast Guard, responding to distant areas that might take the Coast Guard a very long time to attend.

As properly, he says the Indigenous mariners who’ve now joined the auxiliary have a wealth of information of their territorial waters.

Cowan admits, even along with his in depth background as a Search and Rescue technician with the army, generally his expertise do not evaluate, particularly in relation to navigating the waters and whirlpools alongside the coast.

“They’re extraordinarily completed,” he stated, talking with All Factors West host Kathryn Marlow. “They have been doing this for a really very long time. They know the waters.”

And because the man in cost, Cowan has no complaints.

“It actually does make my job straightforward, would not it? I simply need to hold the lights on and get the gear to them.”

The volunteer members have additionally been supplied with correct coaching, gear and certification for his or her neighborhood boats. He says model new Search and Rescue boats are additionally being constructed because of authorities grants.

And, happily for these travelling up and down the coast, Conrad believes that is solely the start for the auxiliary, which he hopes to in the future develop to different First Nations.